A big thank you to Tekever

A big thank you to Tekever who have signed the Armed Forces Covenant!

The Armed Forces Covenant is a promise from the nation that those who serve or have served in the armed forces, and their families, are treated fairly.

Nominations for the 2019 CVQO Westminster Award are now open!
The adventure starts here.
Do you know a special young person who deserves recognition for something fantastic they’ve achieved recently? Well, now’s the time for you to help them shine. @CVQO #Cadets

151 Regiment, Royal Logistic Corps (RLC) will be taking part in the Lord Mayor Show on Saturday 10 November 2018.  This year’s display is inspired by the RLC’s 25th birthday message: ‘Centuries old, Decades new’.  We have a fantastic history that goes back centuries.  And the achievements of the Corps since forming in 1993 are exceptional and worthy of celebration to inspire those that will serve throughout the next 25 years.  The unit is position number 77 within the parade.  The sequence of the RLC contribution is Tank Transporter, Rolls Royce, Bedford Fuel Tanker.

Tank Transporter.   The RLC’s Heavy Equipment Transporters are crewed by two specialist drivers from 27 Regt RLC, and weigh almost 47 tonnes unladen.  Capable of carrying all of the army’s tanks and armoured vehicles, fully-laden they can weigh nearly 120 tonnes.

Representing our historic roots, Monty’s Rolls Royce.  Built to order for a long-untraceable woman buyer in 1939, this Rolls Royce Wraith was taken over by the Ministry of War Transport on 24 January 1944. It is a 1½ ton Park Ward-bodied light limousine, with a 4275cc engine and is fitted out with light tan leather seats and hand-moulded wooden trim.  In 1944, Field Marshal Bernard Montgomery (by now the most important soldier in the British Army and one of the key commanders in planning the Allied invasion of Europe) decided to leave behind the open-topped, sand-coloured Humber Super Snipe staff car he had used in North Africa. He was looking for something grander and more impressive and settled on this Rolls Royce. 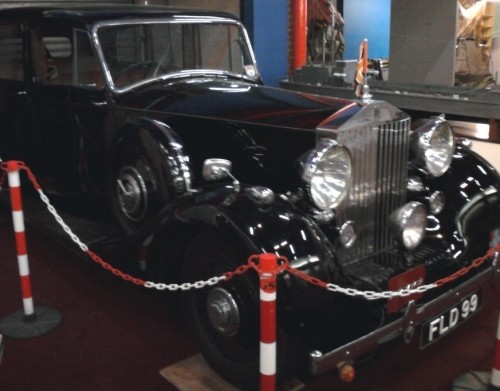 Representing our historic roots, a vintage Bedford Fuel Tanker.  From 1952 which supported operations in Northern Ireland in the 1960s, showing a small cross-section of the enormous variety of ‘stuff’ an Army needs in order to operate. From tanks and ammunition to letters and food, we get the right amount of the right kit to the right people in the right place at the right time – enabling the Army to do its job, and boosting morale along the way. We fight logistics through to keep the army working, moving and communicating.

151 Regiment, Royal Logistic Corps is London’s only logistic unit. Based from five Reserve Centres across Greater London and the SE of England, its deployable role is sustaining ‘The Iron Division’ – 3rd (UK) Division, the British Army’s high-readiness armoured war-fighting formation. 151 Regiment can proudly trace its origins and affiliations within the City of London back to 1801 and the formation of the Royal Wagon Train in Croydon.

Close Encounters Of The Giraffe Kind For Cadets

Carl Parker, Head of African Experience Section explained: ‘The cadets have been absolutely brilliant and their incredible leaf picking skills this Summer mean that we now have over 30 barrels of leaves to feed the giraffes during the winter months.’
The nine strong giraffe herd at the popular visitor attraction have a natural diet which consists mainly of browse, or leaves. During the summer months the reserve relies on volunteers to pick leaves which are then compressed in airtight barrels for use as a natural feed supplement during the winter months.
As part of their day out at the popular visitor attraction, the cadets were able to enjoy a close encounter with the giraffes, including hand feeding some of the herd with pellets and browse.

Simon Jeffery, Animal Director commented: ‘As a charity, we rely heavily on support from wonderful volunteers such as the cadets. By giving up their time to pack an impressive 30 barrels of leaves it means that we can continue to provide our giraffes with important, natural feed.’
For further information about Port Lympne Hotel & Reserve and volunteering opportunities, please visit http://www.aspinallfoundation.org/portlympne