I really didn’t know what to expect from my time with 8 Squadron.When you are in Bastion you could be anywhere in the world (anywhere that has been stripped of all vegetation and has a proportionality large amount of Americans that is) but arriving in Nahiduallah was a nice surprise I don’t think I was the only one ready to get out of Bastion, get the show on the road and start counting off the days.

So better than I expected was my first impression, a reasonable size, good accommodation, welfare, kitchen, food hall and of course an excellent gym. We arrived and settled in under darkness so it was left till morning for a full orientation.

The first little tasks we had was to fix the razor wire on the boundary Hesco wall which had fallen down in places from the down draft from the Helicopters. So we PPE’d up and got up on the wall. 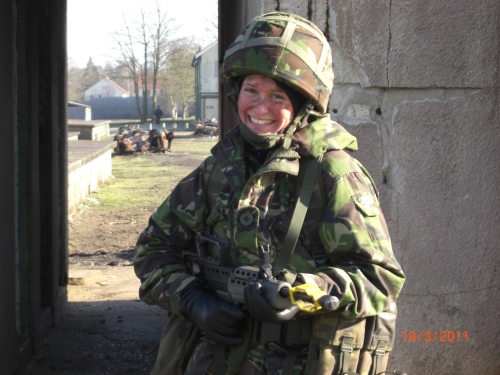 This was my first sight of Afghanistan. I was surprised how green it was and how the small children knew so much swear words and hand gestures. The next few days were full of little jobs around the camp that would make life more pleasant for those residing here such as plumbing, drainage and furniture.

It was nice to hang around camp for a few days just to settle in and orientate ourselves and get a grasp of where we sat in the grand scheme of things. After a few days I got the opportunity to go out on the ground…….well in the Husky as it were. I was told to expect to see lots of ground sign everywhere and that I would get used to certain traits of the locals lifestyles.

One of the first things that stuck me is that people are everywhere! Everywhere, you think you are in a rural area, but there is people in the fields, working, children with their goat herds and small groups of men randomly sitting under tree lines no doubt gas bagging the hottest part of the day away.

This first time outside the wire I was amazed at how structured the villages were, I guess I was expecting to see a worn torn landscape that you see on BBC reports but since being here I have realised that the media is very picky of the images they send back home for all to see.

All in all my first impression of the real Afghanistan was positive, the children (though cheeky) look healthy and happy, the country seemed to be going about its business despite the fact that large ISAF vehicles dominate their roads and their children are getting selective language and hand gesture lessons.

The long move up to our first task was a slow move due to the light wheelie. It was a good chance to check out the scenery along the way and I am happy to report that I was not stoned once on top cover which I was told is an occupational hazard in that position.

On arriving at CP Lagay it didn’t seem too bad, things were basic but it was all there. Sadly things didn’t go quite to plan on this task at this time and it turned out to be more of a ‘Stagging on’ party for me.

There were two Stag positions and though a tedious and underappreciated job it is one that you just resign yourself too and try to make the best of, it wasn’t long before I got to recognise the families of the local compounds and one in particular forever barking dog in the hours of darkness.

Soon it became apparent that there was no need for everyone to be at the CP while the powers to be were debating vital decisions so the call was made for the majority of the troop to head back to Nahiduallah.

I stayed on at the CP which was not too bad……unlike the food.

Those of us left behind just helped out the Infantry lads as much as we could with Stag and bits and pieces and of course moaned…. just the usual….standard behaviour!

Then 3 days later Staff Tait appeared from round the side of the tent and gave us the good news that we were to return to Naiduallah. The route we took home to the PB was different from the route up, it was a bit longer but it was great to see a bit more of the countryside.

On this particular route down I did come under fire from some well-aimed projectiles from who can only be identified as juvenile delinquents in a dish dash. You have got to take your hat off to them they are a great shot and obviously spend a great many hours (no doubt whilst they are supposed to be watching their goats) practicing and honing their skills ready for the ISAF mounted patrols.

Arriving back in Nahiduallh, using the showers was like a dream and the food tasted like the finest in NATO.

I only got a day and a half of this bliss before packing myself off to the Medical Centre where I had to remain for 4 and half tedious very long days, after this period of time I was very happy to regain my freedom and use of gym facilities….oh….and Stag of course!

So we are all settled into our permanent accommodation now and the relief in place is complete so we all know who we will be seeing or bumping into for the next 6 or so months whilst we are here at least.

And so for now its………….. standby for the next adventure.

Welcome to the Jungle

Ex-Cadet and now Officer Commanding Signals Troop in Kenya –Captain Jim Boyden invited Sussex Army Cadet Force to visit the area and provided a variety of exciting training activities unlike anything most cadets will have experienced before.

Cadets spent the first day with the BATUK Engineers who demonstrated various explosives and gave the cadets the opportunity to build a lightweight bridge. The next day was spent gaining an insight into the various weapon systems in use by the British Army.

After two days of jungle training and shooting on the ranges, cadets deployed for a three day Field Training Exercise which tested their military and leadership skills to the full.

It was a week full of excitement, but one of the most enduring memories for many was a visit to a local orphanage, where cadets met some of the children who are resident there.

Captain Jim Boyden said “The visit gave the cadets a real insight into the hardships faced by the less fortunate young people in this part of the world. We donated food and clothes to the children and the cadets were visibly moved by the experience. When the residents sang a thank you song the cadets returned by singing Sussex by the Sea as they left”.